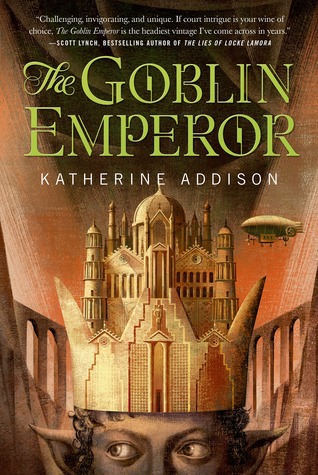 He remembered the moment when his thoughts had inverted themselves—that shift from not being able to please everyone to not trying—and the way that change had enabled him to see past the maneuverings and histrionics of the representatives to the deeper structures of the problem.

This is one of the few books I’ve read so far this year that’s going straight to my favorite list, and one of the very few high fantasy books I like despite it being mostly about court drama, courtly politics, and a dysfunctional ruling family. And it’s a testament to Katherine Addison’s (Sarah Monette’s) writing; she definitely knows how to make courtly life interesting, even for someone like me who hates fictional court politics–I don’t care much for actual court politics either but that’s another matter entirely.

That said, the beginning of the book was hard for me to get into, mainly because the language. It takes awhile to get into the rhythm of the writing and get used to various names and titles of the primary and secondary characters. Once you get it down, though, you won’t even notice it anymore.

The story opens with Maia, a discarded heir to the elven empire, out in the country living the simple life of a peasant. We find out right away that the emperor, the crown prince, and several of their close relatives, who were also in line for the throne, have died in a freak accident. This then elevates Maia to the throne, which he accepts albeit reluctantly, but first he must overcome a court full of nobles who despise him for his half goblin blood and being the Emperor’s unwanted son.

The setting is steampunk but believable steampunk, with believable magic and technology that’s reminiscent of the industrial revolution but set in a fantasy world, but not like that fantasy turn-of-the-century London or Wild West setting that we see so often in the “steampunk” sub-genre. The prose is lush and a joy to read without being melodramatic or maudlin, although it helps to have a main character who’s easy to root for. The writing as a whole definitely gets stronger, just as the world building gets more vivid, once Maia takes the throne and faces off his adversaries and overcomes various courtly obstacles.

However, the pacing is rather slow, especially near the beginning. The plot doesn’t really get going until Maia gets further entangled in the court drama. I almost abandoned the book twice before then, but I stuck with it because I liked Maia–he’s kind, rather naive and too trusting, but not stupid–and I knew where the story was heading and that there’d be a satisfying ending waiting for me. And the ending does not disappoint. I’m glad I stuck around because it was very fitting for the emperor Maia becomes and the long road he traveled to get there.

Overall, a good story that leaves you in a good mood. I’d recommend it for anyone who’s looking for fantasy but is fed up with grimdark.

Not quite 5 stars, but I’m rounding up for the deftness of the writing.

This isn’t fantasy in the traditional sense. It’s fantasy in the Guy Gavriel Kay sense, or what I come to think of as “very little magic” high fantasy, and I find myself preferring this kind of fantasy over the elaborate magic-system-based fantasies because there’s more focus on the characters, their individual stories, and the histories and current events of these made-up worlds, rather than a detailed or complex magical system.

Although there is a little mysticism in this story, there’s no magic and no magic system, and the mysticism happens mostly off scene. And although there are elves and goblins, they’re not magical creatures; they’re just two opposing groups of people within this world. There’s no grand adventure or quest or journey. All of the action is confined to the imperial court. And the main character isn’t a chosen one–he’s just the last one (in the line of succession).

The titular Goblin Emperor is Maia, a forgotten half-goblin son of the previous elvish emperor who died unexpectedly in an airship accident, along with his heir and other sons. Maia’s ascent to the throne is an unsettling surprise to everyone in the court and all across the elven lands; it’s even a surprise to himself. There’s always friction and tension within any court, but Maia’s presence heightens the levels at this court even more, to the point of a coup. The rest of the story is about one lone goblin boy not only surviving, but holding his own against an entire elvish court that makes no qualms about hating and resenting him for what he is–half-goblin and the one never meant for the throne.

Although I liked this book very much the first time through, I loved it this time around. All the little things that got in the way, that made the beginning a slog, a year ago fell away, and I was able to really get into the story and appreciate all its intricacies, nuances, and depths of storytelling. It was such a smooth read that I lost myself in this world nearly completely, and the experience was amazing.

I went with the audiobook this time around, and it made a world of difference. This was the rare instance in which the narrator made the story, instead of broke it, and my immense enjoyment was mostly because of the brilliant reading by Kyle McCarley.

One thought on “Review: The Goblin Emperor by Katherine Addison”