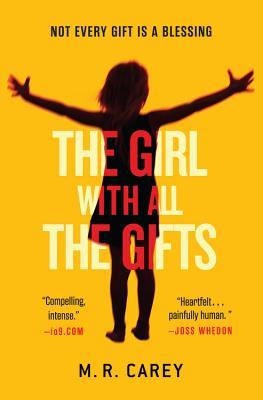 Such intense, vivid writing for a stark post-apocalyptic tale of survival and desperation. The execution–no pun intended–is absolutely brilliant. I rarely wish for a sequel when a story is so well written, but I do hope Mike Carey has one in the works because there’s still so much left to explore.

Everything I have to say about the book itself encroaches on spoiler territory, and I don’t want to spoil it for anyone, so I’ll just say this is the most realistic fictional account of life following an unavoidable apocalypse I’d ever read. The characters and their fears are well depicted, and their journey through a wasteland that was once rural England is fascinating and terrifying. And the thing that fascinates and terrifies me the most is how easy it is to imagine this story as reality, how easy it is to see yourself making this journey through a world in various states of decay and upheaval with predators, human and nonhuman alike, lying in wait. It’s a world so far removed from the comfort of our own, where certain death awaits everyone who ventures out into the open wasteland, but it’s portrayed in a very realistic way.

You can’t save people from the world. There’s nowhere else to take them.

It’s not often that fiction scare me and it’s not often I enjoy the scare, but it’s hard not to like this book or the way Mike Carey writes. He mixes so many classic genre elements together to make them work in such a way that the story looks and feels new and fresh. The individual parts are familiar, but when put together, the whole of it feels unique.

I think everyone should read this book, even if zombie or apocalyptic fiction isn’t your thing. Aside from being well crafted and so suspenseful that you can’t put it down, it’s thought provoking. It will make you look at your world with new eyes and make you imagine a scenario in which you survive the apocalypse and must face a new reality in which you are alone, surrounded by the infected. In that it is like I Am Legend but more disturbing and deeply felt.

This really is a beautiful book, unexpectedly beautiful in so many unfathomable ways. Whatever you think this book is about, it’s so much more than that.

Melanie thinks: when your dreams come true, your true has moved. You’ve already stopped being the person who had the dreams, so it feels more like a weird echo of something that already happened to you a long time ago.

Melanie is a big part of the beauty in this book. She’s the element that makes the story new and fresh. She really is the girl with all the gifts.