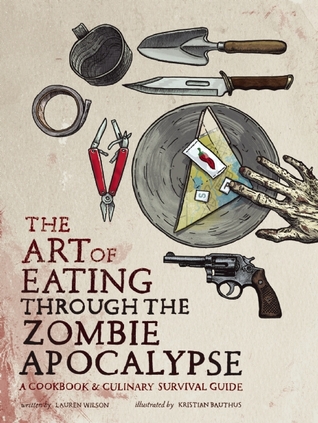 Would you survive the apocalypse? Think that you can? I thought I’d do okay…and then I read this cookbook and now I’m not so sure anymore.

As an introductory crash course to surviving on the run, this book has all the necessary things one would need to know to get by in all sorts of worst-case scenarios. It’s written in a light and fun way, as if to make it seem like you’d be going on a quest–to survive.

Before setting out, you’ll have to gather necessary essentials and prepare for the worst, which could range from the bizarre (zombie hordes) to the tedious (severe weather conditions). If you remove the zombie apocalypse, this book is like any other survivalist how-to guide to living on your own, literally. Imagine that you’d be on your own and have to make/build everything from scratch or scavenge for whatever else you need. You have to know how to forage, hunt, fish, clean and dress your own kills. And that’s just one part of survival. You also have to know where, how, when to hide and where, how, when to run. As if that’s not hard enough, there are zombie hordes lumbering down every street and alley. (Post-apocalyptic scenarios are thrown in for fun, you know, to keep up with the times.)

What I like most about this book is the way it’s formatted, with you, the beginner, in mind–let’s imagine you’re a beginner. There are detailed sections on packing, going on the run, scavenging, looting, various ways to make camp, build fires and snares/traps, fishing, cleaning and dressing kills, and avoiding detection. The first few sections of the book are on packing survival kits and making the tough decision to bug-in (stay put and fortify) or bug-out (go on the run); many of these sections are geared toward bugging out. If you have the “should I stay or should I go” dilemma figured out, you have a fighting chance.

The other sections deal with various necessary preparations, most of which requires a lot of pre-planning, pre-zpoc planning. Like, start now if you want to live. So that if you are to survive the initial chaos of the apocalypse, you would be extremely prepared to live for several months, or even years, by yourself before the apocalypse becomes post-apocalypse. Things would eventually settle down and you’d be able to venture back to civilization again. But what you find there is anybody’s guess.

A big downside to this book is its foraging section. It’s not as thorough as it should be. Half of this book could be focused on foraging alone and that might increase your chance of survival, and personally I think foraging would be much more useful to lone survivors in the wild. Much of your post-apocalyptic diet would–I have to keep myself from typing “will”–consist of plants and roots because they’re safer, less time and energy consuming than hunting and trapping. But wild vegetation has a downside. They’re dangerous if you don’t know what to look for, berries and fungi especially. There are tell-tale signs to determine if a berry bush or group of mushrooms are edible, but that requires some training and experience. If you don’t know how to tell the edibles from the poisonous ones, there’s no point in trying, I suppose. It’s just too risky. You could do a taste test, but that takes time, which people on the run don’t have. Undead flesh eaters are on your trail.

Although I find this book funny and its take on impending doom practical, it really got me thinking about all the things we depend on to get through an average, mundane pre-zpoc day. Fresh, clean water. A roof. A safe place to sleep. A warm bed. A sense of security. All of which would disappear once the electricity goes out and society breaks down exactly like Cormac McCarthy imagined it would. There’d be chaos, violence, turf wars breaking out everywhere… and while imagining all of this, I couldn’t help thinking how I’d never have perfectly cooked, seasoned food again. All that chaos and violence wouldn’t bother me as much since I expect that to happen. It’s the idea of never having something as simple as bread again that gets to me. Spices are out of the question, unless you somehow loot a grocery store in time before the hordes overtake it. Forget about fruits not grown in your native area, and pastas, and sugar, and all diary products. Baked goods and sweets are history, literally. And these are just the simple things. It would be all about living the Paleo way of life from here on out. Way to get me all choked up, book.

Anyhow, this was a fun read, like a romp through an abandoned city that’s gradually being taken back by nature. But take away all the zpoc doom and gloom, and you have a beginner’s guide to venturing out into the wilderness all by one’s lonesome. Great for people on the run, whether it’s from zombies or federal agents or assassins or drug cartels.